Home / Blog / Friendship Bracelets Origin That Will Surprise You

Friendship Bracelets Origin That Will Surprise You

In Indian tribes, it was customary to exchange thread bracelets, and after this exchange the Indians were considered named brothers. There were different types of friendship bracelets too. The bracelet made of threads was not only a symbol of friendship, but also a talisman from evil or an amulet for the fulfillment of desires. The donor tied three knots on the bracelet of his brother or sister named and made a wish for him on the last knot. Here you can find a close connection with nodular magic. It is known that with the help of nodes with the right approach, you can achieve almost any goal. Similar decorations were found among the ancient Slavs.

Modern baubles with Slavic motifs are popular with people who appreciate the experience of their ancestors and ancient traditions. Slavic coastal symbols are often added to such ornaments, and then the charm acquires a more specific focus, depending on the meaning of the symbolism. Indians wear baubles without removing them until the bracelet is lost or becomes unusable. Hippies have adopted these moments that relate to wearing baubles. It is known that they do not remove the baubles from their hands until they break. The Indians usually burned worn out bracelets, hippies can leave them as a souvenir, but such a talisman no longer has any power. Friendship, nowadays, is more than just giving cute squishies. Rather, it now takes giving friendship bracelets to strongly forge the friendship.

If a person has ceased to wear jewelry or it has become unusable, this means that the friendship is over. No more fun times under the blanket with flashlights. Another practice was common among the hippies is roving baubles. Such decorations often changed owners and could change several countries. Most often, they wore the function of road talismans, attracting good luck in hitchhiking and guaranteeing safety during the trip. They were given to fellow travelers who aroused sympathy for good luck on the road.

Often, such decorations were given even after reaching the final settlement after a long journey. Baubles liked hippies who love everything bright and unusual. They used them not only as a symbol of friendship. Bracelets of thread were popular in the role of wedding rings, which made them a symbol of not only friendship, but also love. Over time, the concept of brotherhood faded into the background, and baubles gradually began to become a fashionable ornament. Sometimes these decorations are important, for example, they can tell about the musical tastes of the owner and much more. But this is a rare phenomenon, the importance of colors and patterns on bracelets have long ceased to attach great importance.

What can be a friendship bracelet? 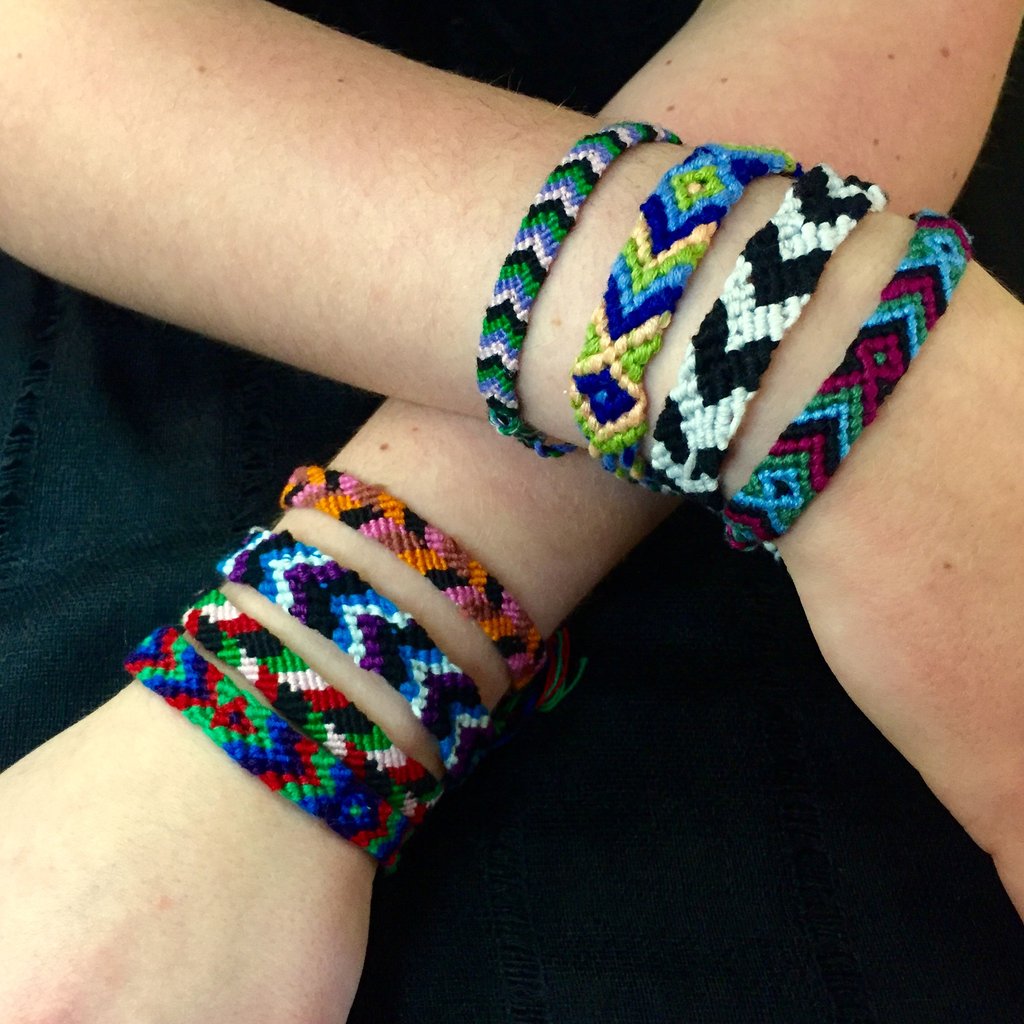 Most often a friendship bracelet is made of floss. The knot weaving technique belongs to North American Indians, from whom they were borrowed by the first representatives of the hippie movement several decades ago. This is not the easiest way to make a beautiful jewelry. You will have to master one of two ways of weaving and spend some time creating a bracelet. This is a big plus. If you need a powerful amulet for a friend or lover, you need to put more effort into it. This principle applies not only to the nodular character, but to all others. If you weave baubles like the Indians and hippies did, you don’t know how, you can make a Shambala bracelet, a twisted ornament or a bead charm. Choose the option that you can do. But this does not mean that the creation of a talisman should be approached using the least effort method. Even a simple option will take time. Thread charm can contain beads made from natural material, collected shells, natural stones and minerals and many other things that will be useful, check out braceletworld.co.

Different colors and symbols depicted on the decoration in the style of hippies have their meaning. True, the options value is very much. In different informal companies, the same symbol or color may have opposite meanings. Therefore, there is no single system if you do not need jewelry for a member of the same company that you belong to. If you keep in mind the principles of color selection for nausea, do not forget to take into account the favorite colors of the person to whom they are intended.

The ward should cause only pleasant associations, otherwise it will not work. Below you will find an interpreter of the meanings of the colors of baubles, beads and its other elements.

Baubles can contain two or more colors, and only you can select their combination. Do not forget that the decoration will be visible and should have a pleasant appearance. A rainbow is usually a symbol of wanting a bright and eventful life, joy and happiness.