Where did the nested doll come from in Russia, who was its ancestor and where is Japan? The most famous toy, which is considered to be one of the symbols of Russia all over the world, in fact, if you dig deeper, it will not be quite Russian.

The appearance of the nesting doll

In Russia, the nested doll appeared relatively recently – at the end of the XIX century. The device of the doll was not quite normal – inside the doll, divided into two halves, hid a few more dolls of smaller size.

The idea of ??creating a new toy originated in the heyday of interest in Russian culture. In Moscow, in the workshop “Children’s Education”, they created dolls dressed in various Russian costumes. It was here that the artist Sergey Malyutin presented the first nesting doll, which got its name from the old Russian provincial name Matryona.

However, the idea of ??creating a nesting doll belonged not to Malyutin. Moreover, the nesting doll in principle has little to do with Russia.

East is a delicate matter

The idea of ??creating the famous nesting doll came to Sergey Malyutin when he met a figure of an Eastern deity brought to the estate near Abramtsevo from Japan, Buddhist saint Fukurum.

The figure was brought from the island of Honshu. Like the nested doll, it was divided into two halves, and inside the old man turned out to have five more of the same smaller figures. Inside the sage, his whole family was hiding.

There is a legend that the very figure of the Japanese sage has quite Russian roots.

According to one of the versions of the origin of the Japanese toy, it was invented by a Russian monk fleeing to Japan, who once carved a figure of a Buddhist deity of happiness and longevity Fukuruma-dza from a tree. The figure depicted a wise man, whose head stretched up from many thoughts. However, no one has yet been able to confirm or deny this legend.

The split toys themselves were quite popular in Japan. Besides, directly, Fukurma, there were figurines with the image of another Buddhist saint – Daruma. 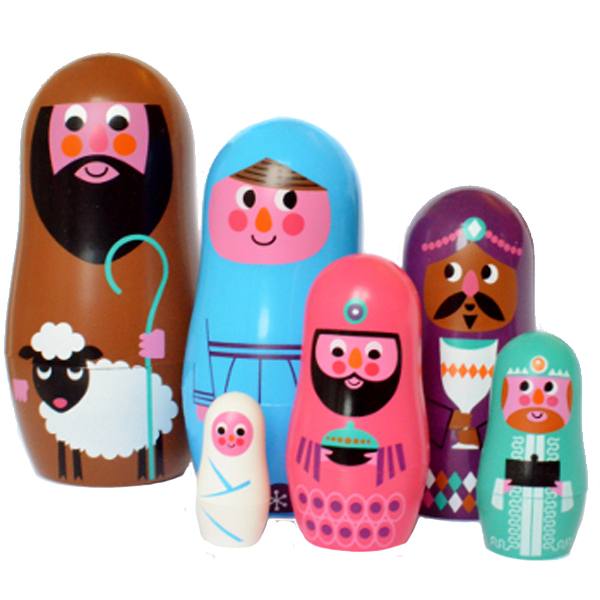 Impressed with a strange toy, Sergey Malyutin draws turner Vasil Zvezdochkin to his creation, who carefully grinds the figurines of a new toy on the machine. Malyutin himself creates nesting doll costumes.

He “dresses up” each doll in a special way. The biggest one was holding a rooster in her hands, the other – the sickle, the third was carrying a loaf. Created Malyutin girls and brother.

Later nesting dolls begin to gain more popularity and begin to paint them completely differently. Initially, they were dressed in national costumes of Russia, after years nesting dolls began to appear, depicting sportsmen, political figures, fairy-tale characters and animals. They absolutely knew how to paint a nesting doll.

Currently, there are several types of dolls: Sergievskaya, Semenovskaya, Tverskaya, Vyatskaya and Maidanskaya. Each of them is distinguished by its type, outfit, ornament and shape.

The nested doll is a great gift for both a foreigner and a resident of Russia. This original gift will be the pride of its owner, because each of the copies is unique and in its own way.

Our store has an excellent reputation, because we have been on the market for years already! During this time, we have pleased more than 3000 customers with high-quality souvenir products. In our store you will be offered not only excellent products, but also favorable conditions for cooperation. Each client is guaranteed quality and a wide range, and we also have a % discount for regular corporate clients. Our nesting dolls at an affordable price have a different configuration: 3, 4, 5 or even pieces in one.

Our store has a huge range of products. Here you can pick up a gift or just an element of decor that will please even the most demanding customer. We want to pay special attention to the souvenir “nesting doll  places”. This is one of the most popular dolls presented in our store. Each of them is charming and unique in its own way.

You can buy them on our website, https://nestingdolls.co, or you can buy places for the nesting doll in Moscow.

These dolls differ from others in that there are dolls inside each doll. They are presented in various price categories that will help you to choose a gift without any problems, based on your financial capabilities.

For the most demanding customers

Almost all nesting dolls of places are handmade. If you suddenly could not find in our store what you would like for you, we suggest making unique ten-seater nesting dolls (pieces in each) to your taste. For a souvenir nesting doll pieces, the price is quite democratic.

Our dolls up to 25 cm high, bright and incredibly beautiful, will decorate any interior. Wherever you are, a souvenir nesting doll places you can buy in the online store.

If you are going to visit abroad, then the nesting doll will be a great gift. Nesting doll  places to buy – this is a great solution for a present. Believe me, such a miracle will not leave anyone indifferent. Also, such a souvenir can be bought for a child. For him, he will be an interesting and favorite toy, because in each nesting doll another!

As you already understood, the nested doll is a universal gift that will please anyone. It also has a versatile use! Some use it as decoration, and others, through sheer innovation, tried using dolls to teach Koshas in yoga.

The nesting doll souvenir of places you can buy in Moscow in our store, which is located at the address.

One of the main images that emerges at the mention of Russia is a nesting doll, a painted, finely carved wooden doll, considered (with a bit of irony or quite seriously) almost the perfect embodiment of Russian culture and the “mysterious Russian soul”, sometimes perceived as the height of art, now creepy kitsch.

However, how Russian is Russian nesting doll?

The legendary first nesting doll with a black rooster. Like every national symbol, the nested doll has a legend of appearance. And as in many legends, the truth is overgrown with speculation. Let’s go and we’ll add our portion.

It turns out that the Russian nesting doll is quite young, she was born somewhere on the border of the XIX and XX centuries. The legend calls the place of appearance, the names of the turner and artist, the first to clean and paint the doll. But with the rest of the details, not everything is clear.

Almost all sources said that the prototype of the first nesting doll was a Japanese god. Valid in the 2nd half of the XIX century In Europe and Russia, a fashion for everything Japanese appeared, there was an extraordinary demand for Japanese prints of any content and quality, exotic Asian figurines, etc. But there is no clarity with a specific prototype, the “father” of the nesting dolls. Most often the name “Starets Fukurum” sounds.

The first group of legends “recognizes” in Fukurum the long-headed Fukurokuju, the god of wealth, happiness, abundance, wisdom and longevity. Fukurokuju is depicted as an old man with an unusually elongated forehead, often carrying signs of a phallic cult. The pear-shaped shape of an old man really resembles the outlines of the shape of a classic Russian nesting doll.

Fukurokuju is one of the so-called “seven gods of happiness”, sitifukudzin. The composition of sitifukudzin was unstable, but the total number and unity of the characters invariably was at least from the 16th century seven gods were really popular in Japan, for example, in the era of Tokugawa, there was a custom to bypass the temples dedicated to the gods of sitifukudzin.

Some adherents of the theory of “paternity” over the nesting doll of the elder Fukurokuju believe that the seven gods of happiness could invest in each other, according to the principle of the modern nesting doll, and Fukurokuju was the main, the largest demountable figure.

According to another version, only form was borrowed from Fukurokuju, and turner Vasily Zvezdochkin filled it with recursive content already on Russian soil. Truly chiseled dishes and wooden detachable souvenirs, such as Easter eggs, were, to put it mildly, not unusual for Russian masters, that is, technically, the nested doll did not represent a special novelty or complexity.